The geographical location of Prince Rupert is perfect for intercepting all species of migrating salmon that are on route to the numerous rivers that they originally came from. What this means is that we get the first chance at these salmon as they migrate by from their wintering grounds to the north prior to them passing by the Queen Charlottes, Vancouver islands and the many fishing destinations in between. With an abundance of herring, pilchards and needle fish in the area hungry salmon like to stop & feed on the huge bait balls in the area prior to their final rivers of choice where they will spawn. 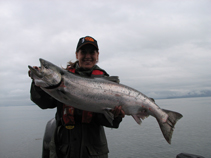 Chinook Salmon (also referred to as KING or SPRING salmon)
Chinook salmon are the most highly sought after salmon of all the species due to the incredible fight they give a spot fisher and the huge size they can grow too. Chinooks start to show up in numbers in May with peak season being June and July of each year, the average fish weighs in from 15-30lbs with many caught each year in the 30-60lb range and a hand full are landed each year in the area that exceed the 60+lb mark.

When fishing for Chinooks we generally troll with herring, anchovy or a select number of spoons. Once an angler feels the pull on his or her rod it is an instant rush and a very addictive thrill of a sport fisherman’s life time. Any Chinook weighing in at or above the 30lb mark is considered a `TYEE` and defiantly gives the angler bragging rights among their party. 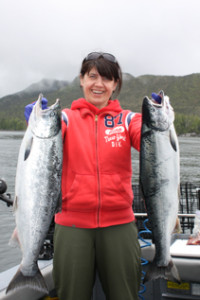 COHO Salmon (also referred to as silver`s)
COHO or Silver salmon are known for hard fighting runs with multiple jumps & acrobatics. COHO salmon can be very aggressive and double and triple headers are not uncommon once on top of a feeding school. Peak season for COHO is from the middle of June through August when the Jumbos are here in great numbers with fish as big as 20 – 25lbs caught daily.

Pink salmon, Chum salmon & Sockeye salmon are often not targeted by many sport fisherman due to the time on the water being spent mainly chasing the trophy Chinook & Coho that roam the waters. (When a nice Sockeye is caught though they tend to jump rite into the BBQ on board, funny how that happens) 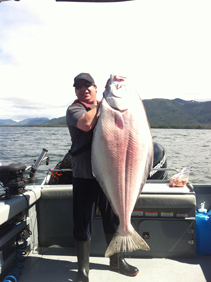 Halibut are hands down the most sought after bottom fish in the North Pacific & Prince Rupert is a meca for testing the arm strength of numerous anglers each year. Halibut can be caught almost all year long with May through September being the peak season. They can be caught while trolling but the main method for targeting these fish is drifting over top of pinnacles on the ocean floor or anchoring and putting in your time as they search for food. The old saying in Halibut fishing is “wait & weight” meaning you do have to put in your time but it will usually pay off with a big fish. If you are looking for some of the finest table fare the Pacific has to offer or just looking to build up some arm strength than the Pacific Halibut if the fish for you.


HALIBUT FACT`S
The Pacific Halibut is the largest fish sought after by anglers off the West Coast of British Columbia and Alaska. They can grow to weights of over 500pounds and measure nine feet in length. A halibut of this size may be 45-60 years old. Halibut spawn in winter in very deep water and a 150 pound female may spawn approximately 2.5million eggs, young fish settle to the bottom of inshore water banks and eventually return to the deep water as they age. Mature adults may migrate up to a range of 2000 miles from the California coast to the Bearing Sea and northern Japan in depths of water from 60-3500 feet. These bottom fish feed on a large variety of fish and squid and have very well developed teeth on both the upper & lower jaws. Whether we are bringing in a 20lb Chicken or an 80+ Barn Door we have to exercise extreme caution as these fish have been known to cause injury & chaos with their powerful tails once on deck.

Yellow Eye (referred to as Red Snapper), Ling Cod and an abundance of other bottom fish are caught on a regular basis when fishing for Halibut. We do target these fish in a different method if the limit for salmon & Halibut is on board though; we will drift over top of many rock structures on the bottom while presenting a few secret lures that they cannot resist. Many ling cod in the 50lb range are caught each year and can also be some very fine table fare as are most of the bottom fish in the area.